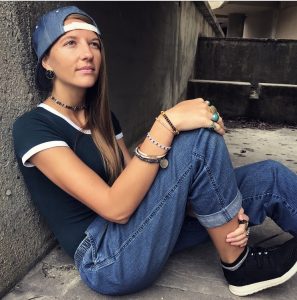 Life has tons of meaningful opportunities for us to connect as human beings. ZoE loves finding the touch points where people can be “real” with each other. ZoE grew up in small town Alberta and began her work as a voice actress for animated cartoons when she was 11 years old. ZoE has experienced many obstacles as a woman and has often been told she could not or should not do something because she “is a girl”. ZoE has met this opposition with enthusiasm, she travelled alone as a female for several years after high school, exploring from Morocco to Portugal to Bolivia. Her professional voice work is all male cartoon characters, something she is proud of!

She is passionate about her studies in the male dominated field of Anthropology at Mount Royal University and enjoys exploring the question of “what does it mean to be human?”. ZoE is a strong advocate for the power of the feminine and she is not afraid to use her voice as a woman. She is well versed in the YYC spoken word and hip-hop community. She regularly performs and fights to hold space for female emcees in the male dominated rap world. ZoE is President of Cypher Club, a group that meets weekly to practice freestyle hip hop. ZoE believes in the power of art and creative expression to empower, heal and connect human beings. She is constantly exploring her own weirdness and strives to strengthen sisterhood in her daily interactions. Power to the SHE in all of us!